Head of Divison for Bilateral Relations with the States of Central, Eastern and South Eastern Europe, Central Asia and the Southern Caucasus, Federal Chancellery, Germany

Knut Abraham is currently Head of Division for bilateral relations to the countries in Central-, East and Southeast Europe, Central Asia and the Southern Caucasus in the German Federal Chancellery. Previously he served as Consul General and Head of the Legal Department of the German Embassy in Washington D.C. From 2006 to 2011 Knut Abraham was the Deputy Head of the Division “Global affairs, United Nations, Human Rights” in the Federal Chancellery in Berlin. Prior to the first assignment in the Chancellery he was the liaison officer of the Foreign Office to the Christian Democratic Group in the German Bundestag. From 2003 to 2005 Knut Abraham was desk officer for NATO operations in the NATO division of the German Foreign Office. He also had diplomatic postings to the German Embassies in Sofia/Bulgaria (2000-2003), Helsinki/Finland and Tallinn/Estonia. Before entering the diplomatic service he studied law at the University of Bonn and was serving as head of staff of Otto von Habsburg, Member of the European Parliament.
Subjects:
Brexit, Democracy, European Union, Integration
Updated: May 10, 2017
Share 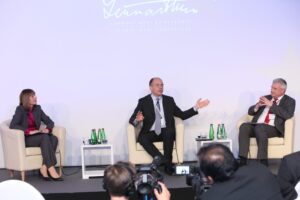 The EU at 27: What Prospects for a Stronger Union?