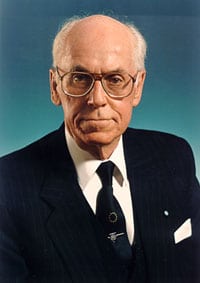 Lennart Meri was born on March 29, 1929, in Tallinn in the family of the Estonian diplomat and later Shakespeare translator Georg Meri. With his family, Lennart Meri left Estonia at an early age and had to study abroad, in nine different schools and in four different languages. His warmest memories are from his school years in Lycée Janson de Sailly in Paris.

The family was in Tallinn at the time when Estonia was occupied by the Soviet armed forces. In 1941, the Meri family was deported to Siberia along with thousands of Estonians, Latvians and Lithuanians sharing the same fate. Heads of the family were separated from their families and shut into concentration camps where few survived. At the age of twelve, Lennart Meri started his career as a lumberman. He has also worked as a professional potato peeler and a rafter.

After the trip to the Tian-Shan Mountains in the Central Asia and the old Islamic centres in the Kara-Kum Desert in 1958, Lennart Meri wrote his first book, which met the warm reception of the readers. Already as a student, Lennart Meri had had to earn his living with writing, after his father had been arrested by the Soviet powers for the third time. With the help of his younger brother who had to quit his studies and take a job as a taxi-driver, he managed to support their mother and to complete his studies. And yet it was only through his first book that Lennart Meri discovered his true calling. For a quarter of the century he wandered alone or arranged expeditions to the regions of the Soviet Union that were the hardest to reach, and where he was fascinated by the cultures of small ethnic groups, the history of the discovery and colonisation of Siberia and the constantly aggravating economic and ecological conflict between the local needs and the planned economy of the Soviet Moscow. The books and films born of these travels managed to penetrate the iron curtain and have been translated into a dozen languages. The film “The Winds of the Milky Way”, shot in co-operation with Finland and Hungary, was banned in the Soviet Union, but won a silver medal on the New York Film Festival. In Finnish schools, his films and texts were used as study materials. In 1986, Lennart Meri was awarded the Honorary Doctorate of the Helsinki University. He had become a member of the Estonian Writers’ Union already earlier, in 1963. In the Seventies, he was elected the Honorary Member of the Finnish Literary Society.

Between his travels, Lennart Meri translated the works of Remarque, Graham Greene, Vercors, Boulle and Solzhenitsyn. At the time of the totalitarian russification campaigns, Meri’s literary works, films and translations significantly contributed to the preservation of the Estonian national identity. His “Silverwhite”, which became the most popular of his works, an extensive reconstruction of the history of Estonia and the Baltic Sea region, depicted Estonians as free people in Northern Europe, as active agents in an open world.

After more than twenty years of expectations, the Soviet administration finally gave the permission for Lennart Meri to travel behind the iron curtain, and Meri persistently used the opportunities open to him in Finland to remind the Free world of the existence of Estonia. He established trustful relationships with the politicians, journalists and the Estonians who had fled from the occupation. He was the first Estonian to take abroad the protest against the Soviet plan of mining phosphate in Estonia, which would have rendered a third of the country uninhabitable.

In Estonia, environment protection soon grew into “the Singing Revolution”, which was led by the Estonian intellectuals. Lennart Meri’s speech “Have Estonians Got Hope” focused on the existential problems of the nation and had strong repercussions also abroad. Lennart Meri’s shift of focus from literary to political activities was smooth and yet antedated the political events. In 1988, he founded the non-governmental Estonian Institute to promote cultural contacts with the West and to send the Estonian students to study abroad. Estonia’s cultural missions opened under the umbrella of the Estonian Institute in Copenhagen, Stockholm, London, Bonn, Paris and Helsinki functioned as embassies and became officially so in August 1991, when the democratic West restored diplomatic relations with the Republic of Estonia.

Neither for Estonia herself nor for the West had the Soviet occupation disrupted the continuity of the Republic of Estonia or eliminated her international obligations and rights. Therefore, Estonia does not belong to the “new democracies”, as the Republic of Estonia was an active member of the League of Nations already in 1921. Lennart Meri signed the instruments for the restoration of diplomatic relations already as the Minister of Foreign Affairs. To this post he had been appointed on April 12, 1990, by Edgar Savisaar, leader of the Popular Front, after the first non-communist elections. Prior to this, Lennart Meri and other authors had already published the collection of documents titled “1940 in Estonia” (1989), which unsuccessfully attempted to convince the Soviet members of the Parliament that the occupation and Sovietisation of Estonia were based on the criminal Hitler-Stalin pact dividing Europe between the two totalitarian regimes.

As the Minister of Foreign Affairs, Lennart Meri’s first task was to create the Ministry of Foreign Affairs, to employ studious young people, and to establish a steady communication channel to the West, and at the same time, to represent Estonia on the more important international conferences. He participated in the CSCE Conferences in Copenhagen, New York, Paris, Berlin and Moscow, on the foundation conference of the Council of the Baltic Sea Countries, had several meetings with the American and European Heads of State and Ministers of Foreign Affairs, and was the first East European guest to give a presentation at the NATO Headquarters in Brussels.

EN EN RU
We use cookies to ensure that we give you the best experience on our website. If you continue to use this site we will assume that you are happy with it.OKPrivacy policy